For those of you watching the news last night, you may have seen this story about this firm’s recent win in a criminal appeal:

The reporter interviewed me for the story, which largely focused on the consequences of not having an adequate trial transcript. 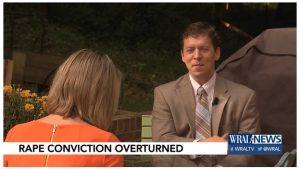 The story (and its headline, “Rape victim has to endure attacker’s second trial after technological glitch”) erroneously present this case as a “mere technicality” where the guilt of my client is a foregone conclusion. That is not the case at all. This case was a “he said, she said” with absolutely no physical or DNA evidence of sexual assault. Further, the accuser had significant reason to fabricate her story, particularly since SHE had been arrested for physically attacking HIM in a separate incident, months BEFORE his supposed attack on her. In fact, she was in jail on her charges up until the day before she testified against my client.

The missing portion of the transcript likely includes the trial court’s decision about whether the jury heard this evidence. The closing arguments imply that this evidence that the accuser had been previously charged with attacking Mr. Yates was kept from the jury. The missing transcript therefore was not a mere technicality; it prevented Mr. Yates from proving that the jury did not hear all of the relevant evidence before it decided who to believe in a “he said, she said” case. It’s for that reason that a new trial is not just a technical requirement, but the right thing to do.